Chris Brown ask to be on Davido’s groomsmen train

Davido has revealed American superstar and R&B singer, Chris Brown has requested to be a member of his groomsmen train when his wedding with Chioma takes place next year.

The Nigerian superstar singer took to his Twitter page to reveal the news which everyone has termed an unbelievably majestic occurence if it happens.

Davido is currently on Chris Brown’s Indigoat Tour and due to the chemistry and love between the two music artistes of late, one could easily agree to the possibility of having Chris Brown in Nigeria, putting on a native attire and ready to storm eastern Nigeria as one of the groomsmen at Davido’s wedding.


Chioma Reacts after Davido Proposed to Her 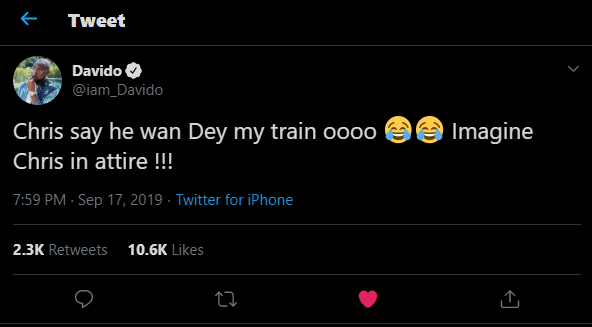 When Are The BRITs? Date, Time, How To Watch And Nominees

‘The world is tough, you must be tougher’ – Yul Edochie advises on what to do when…

Dremo – In The Val