According to the Echo, it’s mixed news for Liverpool after the injuries to Thiago Alcantara and Virgil van Dijk in Saturday’s 2-2 draw against cross-city rivals Everton.

The Echo report that Liverpool are hopeful that Thiago’s knock is not serious, whilst Virgil van Dijk is being sent to see a specialist today over a potentially serious blow to his right knee.

beIN Sports sent the football world into shockwaves by suggesting that Van Dijk has ruptured his anterior cruciate ligament, which would leave the defender out for 7-8 months at the very least.

The Echo report that Van Dijk was sent for a scan after being forced off the pitch due to Jordan Pickford’s horrendous challenge, with the superstar leaving that appointment on crutches.

It’s added that Liverpool are hoping for a clear diagnosis on Van Dijk after he sees a consultant today, with the Echo adding that the club are not speculating on recovery timeframes at this moment in time. 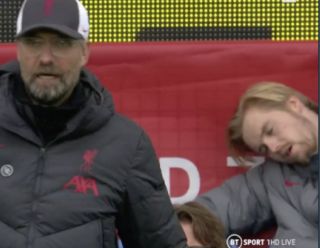 Video: Derby day got a bit too much for Liverpool’s Kelleher as he appears to fall asleep on the bench

If Van Dijk’s injury is found to be serious, there’s no doubt that this would massively impact the Reds’ chances of defending their Premier League title.

The Dutchman is regarded as one of the best players in the world and would be irreplaceable for Jurgen Klopp, hopefully initial fears on the 29-year-old are wide of the mark.