The ongoing fight between Etinosa and Oyemykke has taken a new dimension after the Instagram comedian alleged that the UK-based influencer is a houseboy in London.

Well, if you are not aware of the genesis of the fight, this is how it all started.

Oyemykke had run an advert for a company and could be heard in the ad expressing himself in a rather loud voice. Etinosa in a comment under the advert then wrote the she can never date a man like him because he makes too much noise and too loud for her.

In his response, Oyemykke called her names and even made reference to when she went nude on MC Galaxy’s live video.

The Nollywood actor in another counter-response described Oyemykke as an empty drum that makes a loud noise and then added that house boy to a white woman in London just for a green card.


Oyemykke heavily blasts Etinosa for saying she cannot date him because…

Good morning oo Oyemyke has replied me. I just read it and all I could notice was, even when he’s typing he’s still shouting. I can see he’s looking for a platform to desperately blow I will not post him here. The jobless empty EGBEDIN who is house boy to a white woman in London for Green card has to pay me for advert. OZUOR 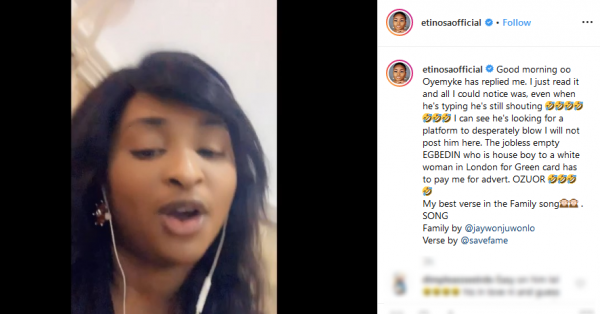 FULL ALBUM: Trippie Redd – A Love Letter to You 4 (Deluxe)…