Man Tied & Murdered In Anambra, Dumped In The Bush

Anas Aremeyaw’s identity has been exposed

Recall that the Social media commentator and musician had vowed to expose the award-winning investigative journalist, whom he claimed has been selling Ghana to the world for his own personal gains.

He posted on social media a picture of Anas Aremeyaw Anas’ passport which bears his name as well as picture.

Recall that on Friday, June 26, Anas announced that he has conducted a new investigation on ‘corona quacks and thieves in Ghana’ and will soon hit BBC’s “Africa Eye” channel and other major TV channels in Ghana.

“Are you ready? It’s coming, the corona quacks and thieves in Ghana. It would be served hot on #BBCAfricaEye and all major TV stations in Ghana.” he tweeted

But film producer and actor Eddie Nartey believes the documentary will yield no better results. 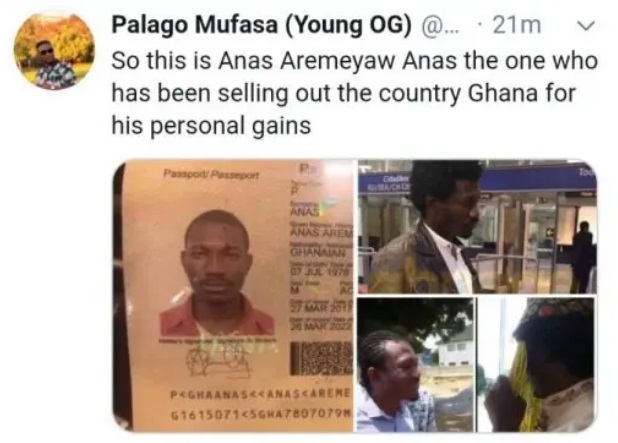 According to him, culprits of corrupt acts in Anas’ previous documentaries have not been brought to book, thus, the upcoming exposé will ‘end after it is aired.

The multiple-award winning journalists, through his investigative piece dubbed #Number12, which was screened on the 6th of June, 2019, exposed corrupts practices in Ghana football.

Maverick politician, Kennedy Agyapong, a member of the Ghanaian Parliament who has a ‘problem’ with the modus operandi of Anas has also premiered his #WhoWatchesTheWatchman to expose Anas and his corrupt deals.

According to Kennedy Agyapong, Anas Aremeyaw Anas is a ‘sheep in a wolf’s clothing’ as he [Kennedy] believes Anas is not the ‘God’ Ghanaians have termed him to be.

DOWNLOAD MP3: Avant – You Don’t Love Me No More